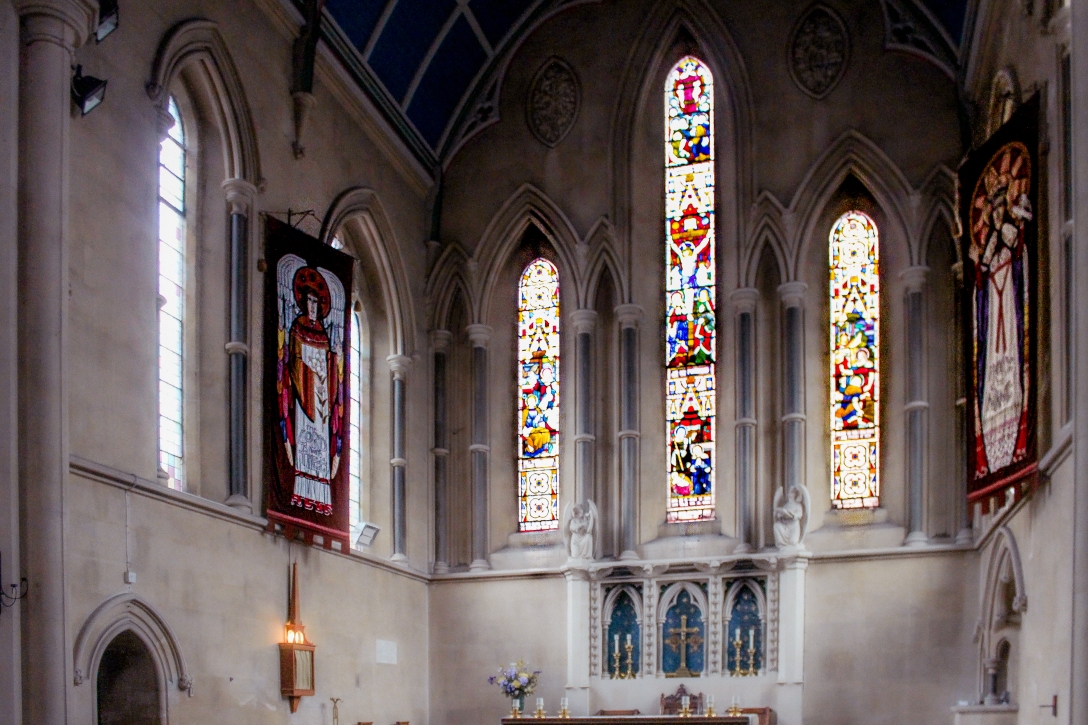 You can see St Andrew’s Leytonstone from the bridge over the A12. Past a shopping park with a giant Tesco and a McDonald’s; cars lined up at the lights like rugby players at the start of a game. Onto a delicate footbridge, blue-and-red painted, where six lanes of traffic thunder out to Essex from Canary Wharf. In one direction, the tall buildings of the City: the Shard, the cluster of sentries just east of Bank and St Paul’s. Across the bridge, ahead: a long terraced street built on London clay, terracotta brick; the flèche of St Andrew’s just visible above a line of skeletal trees. 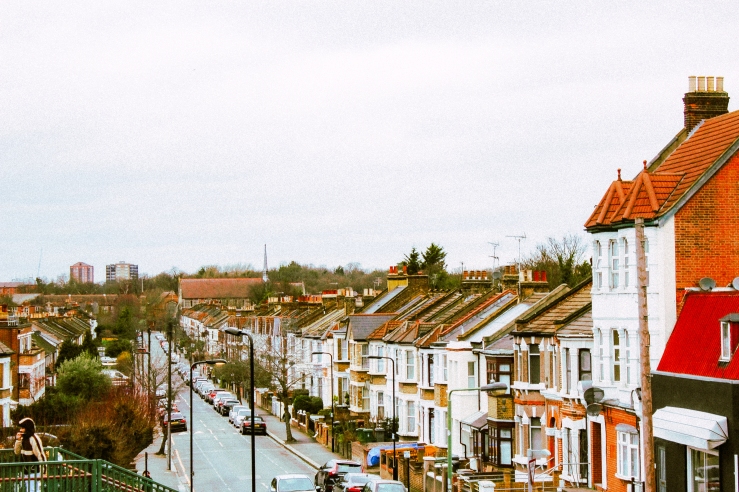 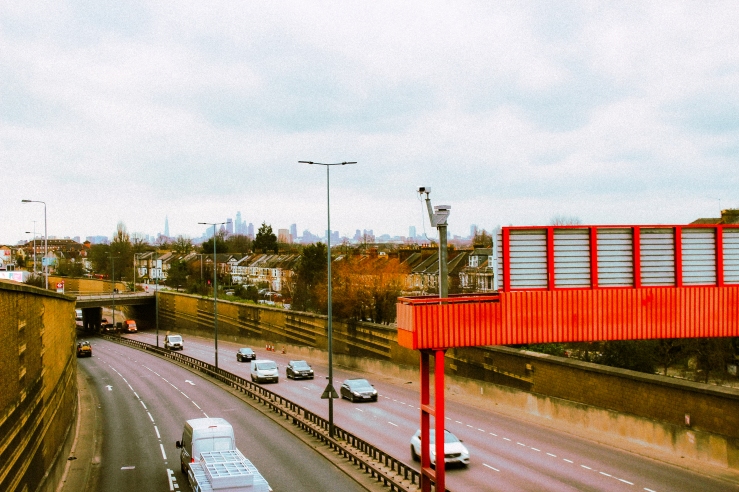 The building itself is a solid mass, fashioned of a strange flinty stone that piles up: pebblelike, almost transparent, capped in by honey-coloured corners. It was completed in 1893 by Arthur Bloomfield, a famous church architect of the time: commissioned by the Cotton family in memory of their father, William, a great philanthropist, who had owned the land. Outside the door are signboards, professionally printed, in red, blue and orange, advertising baptisms, a fairtrade stall, Bistro Night. Multicoloured banners proclaiming the church ‘open’ flutter in the breeze.

I find Fr Paul next to a portable heater throwing out warmth. I remove my coat as he offers me a cup of tea, which he makes in a kettle plugged into the wall. There is a kitchen next-door, but “we’re not allowed to use it because the nursery’s been”. I sit down at a table with a pink and green checked cloth. Fr Paul removes a paper slip requesting 50p for tea.

He came to the church three years ago, after it had spent decades under threat of closure. It still adheres to an Anglo-Catholic tradition. “The liturgy is beautiful, but it’s like a small amateur theatre putting on Twelfth Night. And the theatre down the road does Puss in Boots, better.”

Besides, the ground beneath us is moving. The choir vestry is pulling away the north wall: he shows me the cracks, breaking the plaster like a lightning fork. You can trace them all the way down the middle of the nave: the floor is twisting. “If we do nothing, first it will be declared unsafe,” he says. Then it will fall down. 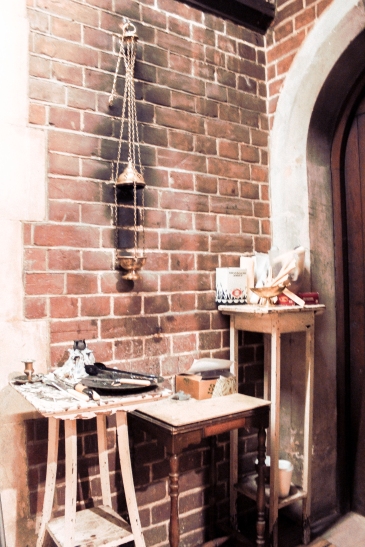 Preventing this will cost close to a million pounds. They are applying for a Heritage Lottery grant. But the real question, for Fr Paul, is ‘why?’ The hall — the half of the church screened off by wooden partition wall — is used all the time: for senior citizens’ groups, art classes, surgeries with local councillors. They’re opening it up in the evenings now for use as a study space, a quiet place for teenagers to come and do homework with tea and toast. Through the half-open door I glimpse retirees sitting on chairs, eyes closed, hands hanging with thumb and forefingers together for ‘armchair yoga’. Gentle music plays as the woman at the front speaks soothingly.

But the part nextdoor — “the spiritual part” — is too often locked, unloved. “It’s a very visual symbol of the church being divided.” There are stained glass windows that continue into the hall. Made by the Arts and Crafts artist Margaret Chilton, they are some of the 20th century’s most important. Vivid with tiny gemlike panes, Impressionist lines frame Pre-Raphaelite faces. She did the first one in 1917, and then offered another “whenever there was a lull in business.” As a result, the collection is unique — spanning her whole career.

The task — as he puts it — is to unite these two sides. “How can we get people to say — ‘this is my church’ — even if they don’t come on a Sunday?” Part of this is learning to share — not being overly protective. After all, “nobody can do anything as bad as those cracks”.

So, an experiment in opening up the church is in its second week. They are starting with Mondays — and hopefully soon it will be Tuesdays, and Wednesdays as well. Fr Paul describes receiving a message from someone locally whose partner had died — young. She had asked, “when is the church open so I can just sit and be still?” 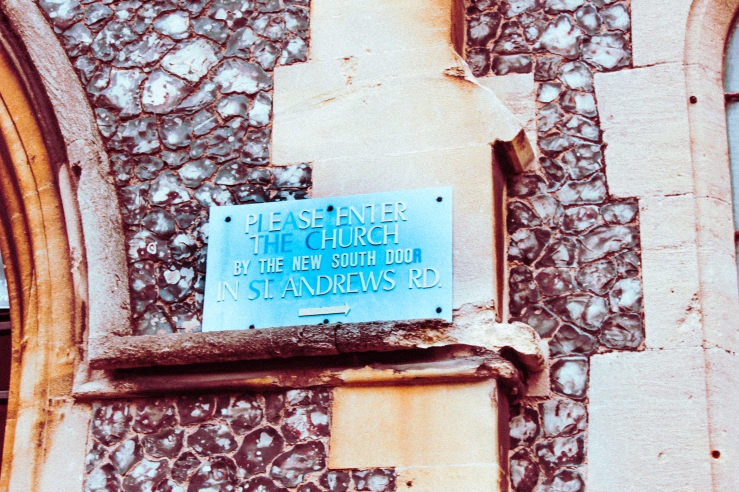 He remembered a fundraising workshop where one of the leaders said: “you have to stop saying, ‘this is our problem, can you help us?’ and start asking: ‘how can we help people with their problem?’”

He points to the three windows next to the door, that depict Faith, Hope and Charity. “The problem is that people have lost these.” The building might be at risk, but “this is what we stand for.” So, in 2020, “the building might be falling around us, but we will start anyway — we will be that centre of faith, hope and charity.”

“I’m hopeful,” he says. People are happy, the congregation is diverse and growing, finances are good. They plan to move the statue of the Virgin and Child — a piece in minimalist marble, after Eric Gill — closer to the door. “To say — ‘this is the God bit’,” explains Fr Paul.